Four “heavily disguised” men who raided an Auckland jewellery store on Tuesday were caught on CCTV.

The offenders kicked and smashed their way into Sona Sansaar on Stoddard Rd in the suburb of Mt Roskill just before 1pm.

“The offenders committed an alarming attack in broad daylight while members of our community were going about their daily business.” 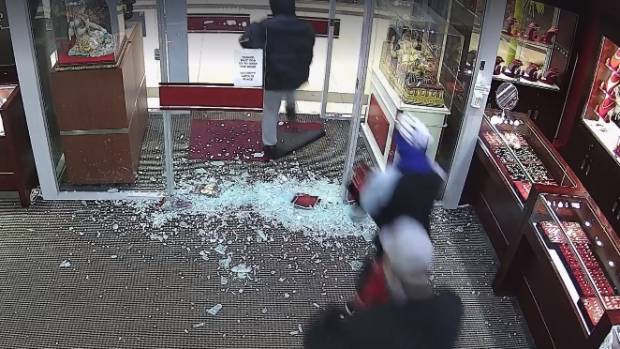 Three of the four robbers were caught on camera fleeing the Mt Roskill jewellery store.

“The ordeal was frightening for the victims involved and those who were in the store at the time”.

“Someone” will recognise the heavily disguised robbers, Baldwin believes.

Police also believe a fifth offender may have been driving a stolen vehicle used during the robbery which was recovered later the same day.

“We are also appealing to anyone who may have seen a dark green older model Toyota with the right rear passenger window covered in tape near Valonia Reserve, Mt Roskill either before or after the incident.”

Information can also be provided anonymously to Crimestoppers on 0800 555 111.